Having struggled through the noisy, dusty and sometimes unpredictable soccer pitch construction, we have come out the other side stronger and more vibrant than ever. Our garden is now surrounded on all sides by a tall fence, giving us a sense of privacy and intimacy previously lacking. At the start of August we bade farewell to the super gardening team Julie and Marcel (pic below, standing and in hat), who returned to France, leaving us their amazingly healthy bed— neat rows of artichoke, tomato, celery, strawberry, basil and courgette. All the best to you both in Montpelier. You are missed… Au-revoir…

We also gained two new members — Sarah (pictured below right, with me left in my protective ushanka) and Ilana, who are already working industriously and productively in the garden. Sarah made several raised beds, a la permaculture, which within weeks yielded a mammoth tomato and cucumber crop. Her largest tomato, 20 cms in diameter, shows no sign of fatigue, and the vine from which it hangs looks none the worse for wear. Neither does she, despite working 20 hours plus each week in the garden, with her jigsaw and hammer, planks of wood and balls of string, buckets and spade.

Vered, hard at work below, returned from her summer vacation to find her beans had grown almost to the ground. I picked some while she was away and ate them spaghetti style, twirled around a fork in a rich tomato sauce. Her vigor unabated, she immediately set about cleaning the garden, clearing a space for 2 new composters (in the area outside the garden perimeter so people can deposit their peelings directly in the composters rather than leaving them outside the gate for us to pick up –or rather scoop up—when we arrive the following day).

She also salvaged some shelves from the roadside and is using them to house all our odds and ends (string, nozzles, scissors, nails, irrigation pieces, piping, paints etc). In true Vered style, each drawer is labeled (in Hebrew and English) and perfectly tidy.
Vered is onto Yossi, the soccer pitch contractor, to move our tool shed into the garden as promised (it currently stands outside) and to move the former sports equipment shed which is no longer in use since the basketball court has been grassed over. That will give us a lot more space for planting trees, creating a shaded seating and schmoozing area close to, but not inside, the garden.
Some beds are unattended and rampant with weeds. We are hoping to give those beds away, because the weeds are ugly and spread fast. If we can’t find people to take them, we will cover them and simply leave them unplanted throughout the winter.

At our meeting on August 26th, attended by all the regular garden members except Neil who was in Norway, we decided that it would be good to erect a succah at the back of our garden, which would serve multiple purposes, not least providing a covered seating area in all seasons and weathers. Given that it will soon be Succot, there is no better time than now to get that idea off the ground.

We also discussed the issue of water leaks, of which there have been many these past months. It is important that we are vigilant and if we find a leak, we turn off the irrigation line to that section. We have had several floods of late that are not only a terrible waste of water, but also damage the garden.
The manginot festival is coming up soon and we are considering participating. Members who wish to help should make themselves known (to Vered) and come up with ideas. We have 2 weeks in which to decide if we want to take part this year (the past 2 years were quite successful). The happening would be one day in October, to be determined by us.
Soon it will be time to plant for the winter season. We are busy pulling up our summer crops and preparing the beds for winter. Last week we had a timely delivery of eight bags of woodchips which will be used for the paths between the beds, the vines, and around the garden.
The felines are doing well. Kittens abound. Proud 4-legged mothers lounge on the bench and survey their offspring amidst morning glory, carob and bougainvillea. A fecund pastoral scene in the heart of the city, an oasis for man and animal, a cooperative venture from which everyone benefits.
Summer is coming to an end and the New Year approaching. I wish everyone a Shana Tova!

Some New Pics from the Mizmor Garden 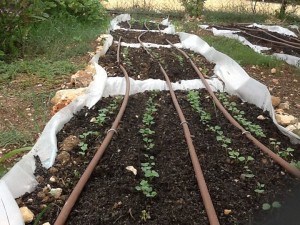 This thriving urban farm takes up 4,000 square feet of Mizmor LeDavid’s outdoor facility and enlivens the neighborhood, providing vegetables and herbage to anyone interested. Nourished by the local community’s compost and the care and labor of its dedicated volunteer family, the garden flourishes. Everyday people from the neighborhood come to harvest the beans, kale, cabbage, tomatoes, basil and much more to enjoy over the next couple of days, as stipulated by the shmitta halachot.

The garden not only provides delicious, healthy produce for the community, but is a springboard for teaching sustainable agriculture. The garden hosts community programs for synagogue members, student groups, and plan to integrate at-risk youth, the elderly, and adults with disabilities. 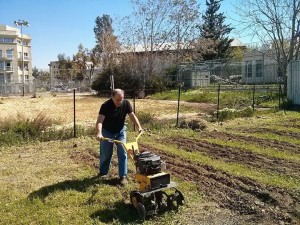 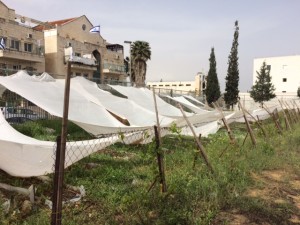 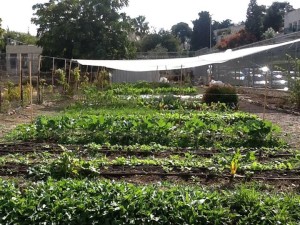 Be a part of this holistic, holy effort. Support the Land of Israel by donating a small plant or fruit tree to this shmitta garden. Help cultivate a healthier Jerusalem and a healthier Israel.

You can track the efforts of the community garden with the Garden Digest and our Facebook page.

Donate to the garden HERE.