Every Thursday evening a group gathers in the Sephardic Synagogue on Mount Zion. It is a small gathering, not many know about it, and those who come are fewer. Nonetheless, for the last 50 years or so this group has come together once a week to sing and praise the Lord Almighty. They sing very particular songs. These songs come from a book called “Shira Hadasha” (a New Song), a collection of newer and older religious songs, some written to the tunes of arab pop songs of the last century, and some dating all the way back to medieval Spain. Among these songs, they specifically sing a collection known as “Baqashot” (Supplications), though this name is misleading, as they are mostly songs of praise and meditation on the greatness of God and his commandments. The Baqashot are a fixed series of songs, separated by texts used for improvisation, all based upon the Arabic maqam system of music. Many of the tunes of the Baqashot may have originated from Arabic or Turkish songs, but if so, most of those songs are forgotten and were lost over the years, their tunes preserved only as tunes for the Jewish texts. Traditionally, the Baqashot were sung before the morning service of Shabbat during the winter, when the nights are long, and can be spent praising God and praying for redemption. This tradition came into its current form during the last few hundred years, and was developed by the Jewish community of Aleppo, though its roots seem to go as far back as medieval Spain. It started as small groups of scholars and mystics who would arise early on the Shabbat winter nights, and sing for several hours until the time came to pray the morning services. This tradition continues today in the two main synagogues of the Aleppan community in Jerusalem, the Ades and Moussayoff synagogues, with a beautiful gathering of cantors and regular congregation members who sit and sing for four long hours before starting prayers at 7 o’clock. But the congregation of the Mount Zion synagogue decided to change this custom. Perhaps they felt it was too taxing, perhaps they tried, but couldn’t get people to come to the synagogue so early. The reason whatever it may, they instead get together on Thursdays and hold a shortened version of the Baqashot, usually finishing the entire text once every five or six weeks. They also like to add at the end of the gathering a song or two in the Maqam (arabic musical scale) that is designated for use for the morning prayers of the coming Shabbat. Everyone is welcome at these gatherings, even those who are not part of the community, and even those who cannot sing (though women, when they come, usually sit in an adjacent room to where the men are sitting). At first, the feeling is overwhelming, as the cantors sing long and complicated songs that you don’t know how to even start learning them, though everyone around seems to know exactly what’s going on. Yet slowly but surely, if you keep at it for long enough, the songs seep in, and you find yourself more and more exposed to a whole world of song and prayer that you had no knowledge of before, absorbing the spirit of the Baqashot and the Arabic maqam, until you find yourself even singing them in the shower. The people who come are mainly older, but one does see some younger people. Perhaps, God willing, with the same power and guidance that allowed these evenings to happen every week for the last fifty years, they will continue for fifty years to come, as well. In the link below I’m adding one of the songs from the Baqashot called “El Elyon” (Highest God). 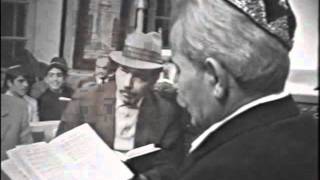